We are all sensitive people. This was clear to Marvin Gaye when he said so in the classic song Let’s Get It On, and its clear to each of us when some event in our lives inspires some strong emotion inside us.

Sometimes these emotions are positive. We feel joy and love and laughter. Often though, perhaps too often, our sensitivity makes us feel hurt or angry. The things that happen to us, especially the behavior of others, can injure our pride.

What good does pride do us? Taking pride in who we are might be okay, but it doesn’t change who we are. We merely are who we are, pride or no. When we become obsessed with our sense of self, and feel as though actions by others toward us always reflect our worth, we start down a slippery path. We approach the world and its people always with the attitude of, “Don’t you know who I am?”

Most likely, they do not. Other people just do what they do and often don’t take notice of who they’re doing it to. Children who raise their middle finger toward me when I drive my sedan on my street don’t know that I’m Brad Feiling, or what all of my traits are, positive and negative. They just want to give a rude gesture to an adult who visibly out-earns their parents. Similarly, whomever scratched my sedan’s driver door with a key in Santa Monica last month likely didn’t know I was the owner of the car.

This is why we must not take things personally. Our tendency to this is natural, but it is a grave liability. When challenged by these things, we need only take a deep breath, and remember that these people are sick, just as we once were. We should be grateful we’re walking a spiritual path now.

Once we’ve done that, we can focus on our revenge. The universe is a place forever seeking balance, so we’ll need to harm the offending person slightly worse than they have us, in order to correct the error. A good way I find, lately, is to smear animal feces on the property of such people. Animal scat can be found almost anywhere, in great quantities, usually the product of dogs (large dogs are best). For example, those neighborhood kids I mentioned? Recently, under cover of night, I visited their homes and smeared the siding and front doors with elaborate murals of the aforementioned substance.

Here again, my pride attempted to jump in and stir up trouble. I was upset that I was not going to receive credit for the feces painting. The victims would not know who did it, or for what reason. I took a deep breath, and reminded myself that this isn’t personal, and continued to wipe large brown circles onto the white, painted wood of the Masterson’s front door.

Today, I don’t need to make anything personal. When I don’t react emotionally, I can even scores with other people using cold, calculating effectiveness.

Growing up, we’re often tossed into situations that have a very noticeable social hierarchy. We learn who is popular, and who is not. We see the roles that everyone, including ourselves, fall into. We learn, more than anything, who is in charge. The dynamic people from whom others take their cues. In our youth, these clusters can most often be identified as, “the cool kids.” 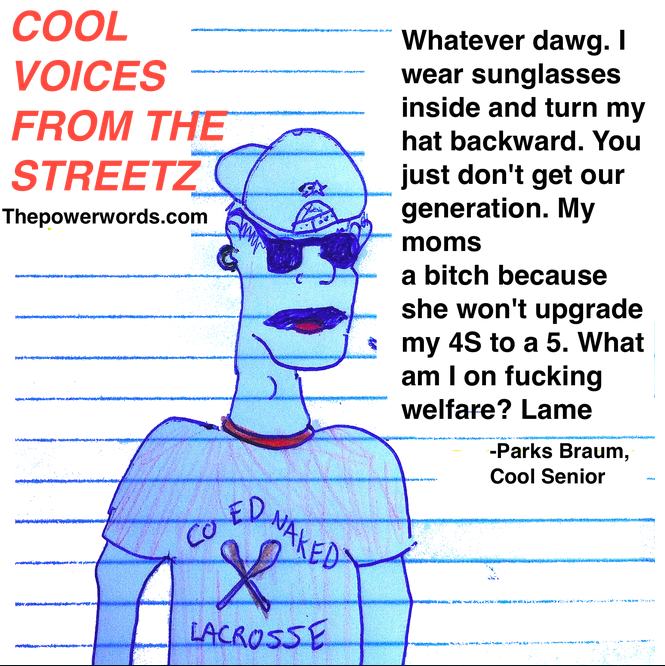 To be sure, it is quite nice being one of the cool kids. The character of the cool kids can differ, but inevitably they are equipped with some innate advantage over non-cool kids. They can be attractive, rich, athletic, defiant, cocky, or any combination of these things and other things. Later in life, former cool kids will assert that they did not have this status, but don’t be fooled. An adult friend of mine once said, “I was a real dork in high school. I really liked The X-Files and had tons of acne.” My friend was neglecting to mention that he’d also been a talented pitcher who had a cool car, and lots of sex all the time. My friend may not have been perfect, but he was solidly amongst the ranks of the cool kids.

It may be hard to believe, but I wasn’t always Brad Feiling, the worldwide self-help expert and industry thought leader, with so much reverence connected to my name. In my high school years, I was most commonly referred to as, “Fag Feilings.” To pun unavoidably: my feelings were routinely hurt by the moniker.

I am no longer called that, or any cruel name. Today, I am secure in the idea that I’m as cool as it gets. I’m totally cool. How, you ask, did I overcome these childhood wounds? Well, in my heart, long into my success, I still saw myself as the weak, 14 year-old son of a failed fishing promoter, terminally unable to pronounce S and P sounds without spitting, and constantly shunned by girls who laughed me off, claiming I smelled of the rotting sea.

I was able to forever drown this former me by, in effect, promoting myself to the rank of cool kid. I realized that the cool kids, for all their slick bravado, would be nothing without the lesser kids they pick on, and define themselves as cool in contrast to. After all, we can’t see light until it reflects off of another object, right?

Today, as the mogul behind ThePowerWords.com and Warm Feilings World Media, I employ several salespeople, security personnel, assistants, and interns. I bark orders at these people, demanding they rush to bring me whatever I need or want, and consistently criticize what I perceive as their flaws, be it in their performance, haircut, or whathaveyou. By doing this, and attacking their self esteem so that I can feel big, I constantly reaffirm my self-image, and can believe everyday that I am cool!

Today, I’m pretty cool. If I forget, all I need do is look at somebody who is not, and target them.

Nobody likes getting the wrong answer. When an employer tells us we are not right for the position we seek, or someone we are attracted to refuses our offer of a nice date at Chili’s, it is normal to feel hurt. We stomp our feet, even if only in our own mind, and demand answers. Don’t I have an impressive resume, and nice personality? Didn’t I tell her she could order whatever she wanted from their elaborate menu? What’s wrong with me? 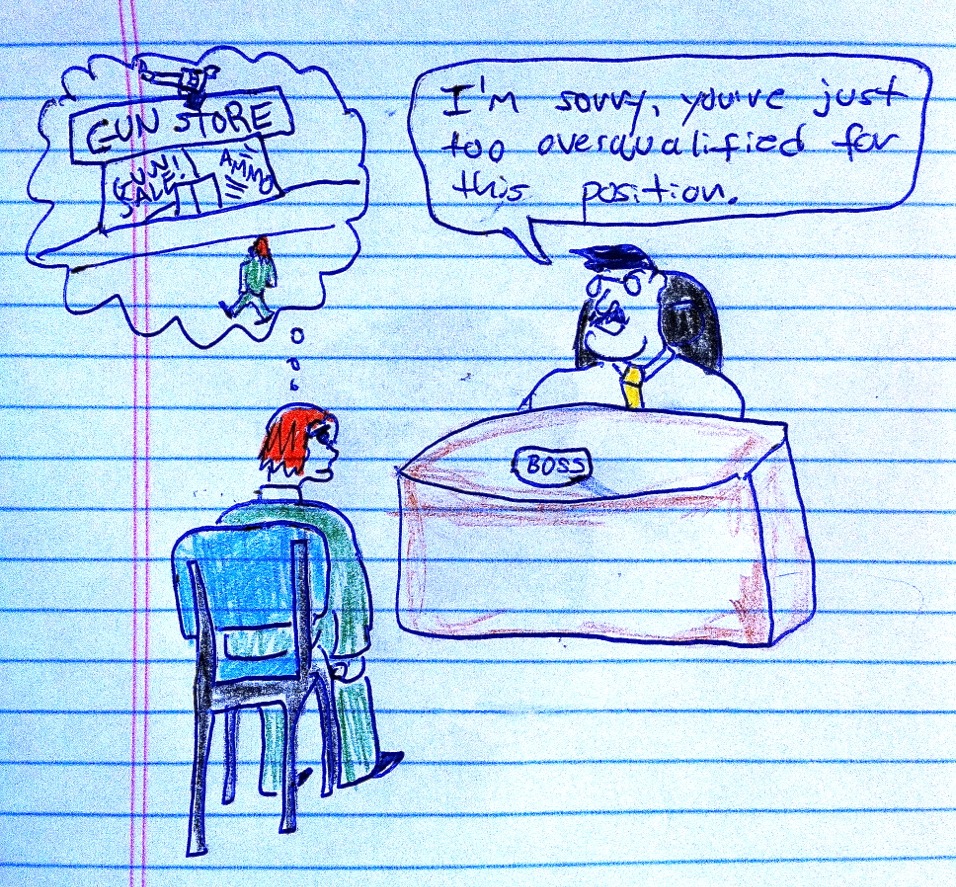 Don’t do anything rash, Ginger Geoff…

The answer is nothing. Nobody always gets what they want, and those who seem to are hateable monsters. When we stubbornly refuse to accept this principle, we only make our situation worse. Our only healthy option is to go forward, seeking a new job prospect, or a new potential mate who would love to be our guest at California Pizza Kitchen. If we are willing to continue, we always find what we’re looking for.

But what of those people who didn’t give us what we wanted? How do we make our peace with them? Quietly. We bear in mind that on a long enough timeline, life punishes all people. That boss who thought we didn’t measure up will eventually realize they are hopelessly confined to the world of middle management, contract an awful disease, or merely be confronted by the fact that their subordinates (fairly or unfairly) hate them. That date we sought will someday personally experience the universal truth that all old people are unattractive. The most vibrant, beautiful person in youth will one day be a disgusting ghoul, if they don’t die young. In either case, perhaps the subject of our resentment will just gain a lot of weight. The point is, bad things will eventually be visited upon anyone we dislike, because they await all people. We can resign ourselves to a quiet smile when we imagine these possibilities, and a humble one if we should hear about them, or run into a fat version of an old nemesis, knowing our own future is as bright as we choose for it to be.

Today I will know that I’m worth it, even if there are those who don’t realize it, and I will focus on me, leaving it up to life to punish them for their transgressions against me.